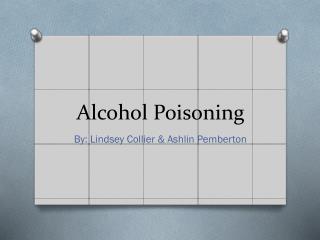 Alcohol Poisoning . By: Lindsey Collier & Ashlin Pemberton . What is Alcohol?. A.K.A Ethanol or Ethyl Alcohol. Yes, it is toxic! Affect the central nervous system, which includes the brain. . Quick Facts.

Alcohol - . chapter 5. objectives. identify the following: types of alcoholic beverages and the alcohol content of each

Harmful Effects of Alcohol Use - Chapter 22 L2 - . by irma garcia. vocab/terms. metabolism – the process by which the

Alcohol and Its Effects on the Body - . alcohol poisoning is a severe elevation of blood alcohol concentration (bac) that

Alcohol - . ch. 21 a. leslie. alcohol. alcohol or ethanol is a powerful and addictive drug that can affect brain

Alcohol - . chapter # 21 lesson #1 the health risks of alcohol use. alcohol. ethanol : t he type of alcohol found in

Alcohol - . what is alcohol?. alcohol is a depressant and a drug. depressants slow the body’s nervous system, brain and