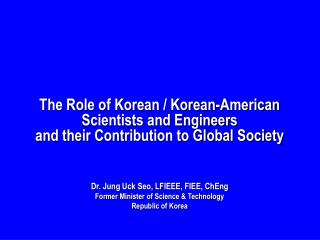 The Role of Korean / Korean-American Scientists and Engineers

The Role of Korean / Korean-American Scientists and Engineers and their Contribution to Global Society Dr. Jung Uck Seo, LFIEEE, FIEE, ChEng Former Minister of Science & Technology Republic of Korea. History is the Teacher of Future Leaders. Let us take a journey through the most

The Role of Korean / Korean-American Scientists and Engineers

The Communist Wars- Cold War, Korean War &amp; Vietnam War - . the cold war- no, it was not a very “cold” war!

Korean War - . the untold war. (hit the start button to begin lesson). history of korea. korea was originally one country

“Scientists study the world as it is; engineers create the world that never has been.” - Science &amp;

THE AMERICAN SOCIETY OF MECHANICAL ENGINEERS - . the value of membership. the challenge of today’s engineering Dear Scientists and Engineers: Would you like to learn the latest breakthrough technologies? - Chinese american chemical

The Korean War 1950-1953 - . the war was caused by external issues. korea had been under japanese occupation during wwii