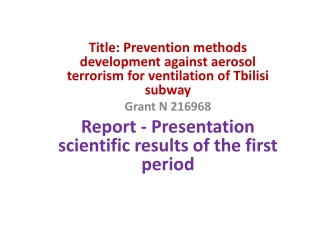 Formal Models of Terrorism - . introduce formal methods and show how they apply to studies of terrorism. present examples

subway - . alyssa e. &amp; caitlin m. description . describe how to the transportation device works? a subway is a

aerosol - . an ancillary data-set in many applications how best to describe global aerosol optical properties for the