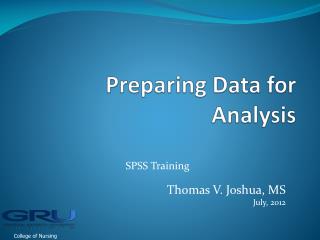 Preparing Data for Analysis. SPSS Training Thomas V. Joshua , MS July, 2012. College of Nursing. Lecture Overview. Why do we need the data management and data preparation for analysis Data preparation and general format in SPSS Introduction to SPSS and overview of SPSS for Windows. Preparing Data for Analysis What to do BEFORE you Analyze Data - . mcrc biostatistics didactic workshop yona keich

Preparing for Rhetorical Analysis Rhetorical Ad Analysis - . after watching the following videos , please fill out the

Chapter 17 Preparing Data for Mining - . introduction. just as manufacturing and refining are about transformation of raw

Preparing For - Engaging the channel survey channelline advisory council how you can help. agenda. worldwide it 2005

Preparing your data base for Medication Reconciliation - . (orx) and (otc) entry tips. do not use the outside rx menu