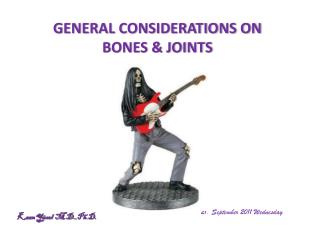 Bones and Joints 1 - . the skeletal system. bone is a tissue, a living material made up of cells, and is it full of

Bones and joints - . by holly and louise!!!. a skeleton is a complex layer of different bones and joins that all fleshy

DIFFERENT KINDS OF JOINTS - . 5.4. joints are where two or more bones meet . they are divided into three types depending

How the bones stay connected! - . joints , tendons , ligaments and cartilage. what would happen if our bones were not

Movement at Joints - . types of motions at synovial joints. gliding flat bone surfaces moving across each other flexion

JOINTS - . joints. is an articulation, the place of union or junction between two or more bones or parts of bones of the

Bones of the Skull - . the skull is composed of several separate bones united at immobile joints called sutures. the

Joints of the Human Body - . what is a joint?. location at which two or more bones meet allow movement and provide

Joints - . class 13 sep / 2011. o bjectives. gain an understanding of the types and functions of the joints in the body.

Joints - . joints (articulation). defined : a point of contact between bones, between cartilage and bones, or between

Skeletal System-Joints - . chapter 7 continued. joints?. they are functional unions between two or more bones a.k.a.—

Chapter 9 Joints - . joints hold bones together but permit movement point of contact between 2 bones between cartilage

Joints - . a joint is the site of meeting of two or more bones. joints are classified into three types (depending on the

Chapter 9 Joints - . joints hold bones together but permit movement point of contact between 2 bones between cartilage