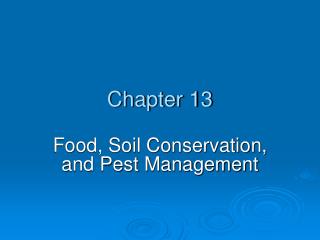 Chapter 13. Food, Soil Conservation, and Pest Management. Chapter Overview Questions. What is food security? How serious are malnutrition and overnutrition? How is the world’s food produced? How are soils being degraded and eroded, and what can be done to reduce these losses?