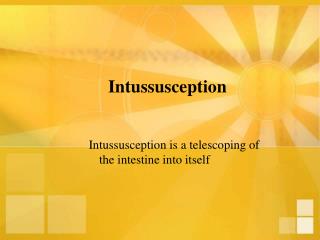 Intussusception. Intussusception is a telescoping of the intestine into itself. statistical analysis. morbidity: 1/2000 age ：The disease occurs most commonly in children between 6 and 18 months of age, but has been described in all age groups including babies in metra and in adults. intussusception - . introduction. the telescoping or invagination of a proximal portion of intestine ( intussusceptum )