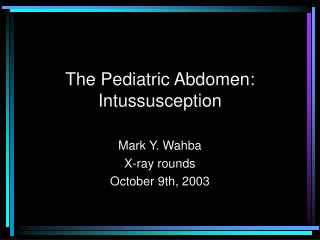 The Pediatric Abdomen: Intussusception. Mark Y. Wahba X-ray rounds October 9th, 2003. Intussusception. most common cause of intestinal obstruction between 3 mo and 6 yr of age 60% per cent of patients are younger than 1 yr 80% of the cases occur before 24 mo rare in neonates