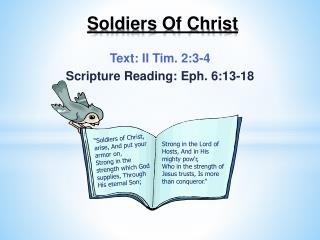 Soldiers - By : juan . soldiers. what do they

Soldiers - . by: josue lumba , ashley mejia, silver miller, and karina pineda. what was the unique contribution that army

Soldiers of the Cross - . marching philippians 3:14 i press toward the mark for the prize of the high calling of god in

THE COURAGE OF SOLDIERS - Presented by chau ly. to cane. the courage of soldiers. pious. wrath. pauline nguyen from

Soldiers of the DDR

Soldiers' Angels - . words from a soldier. it's not the &quot;things&quot; that are sent that matter to us, it's

Child Soldiers - . by: keshia ortega hsp 406-. what is a child soldier . misconception- the term ‘child soldier’ has

Child Soldiers - . child soldiers. will you listen? young voices from conflicts zones: we are displaced children. we are