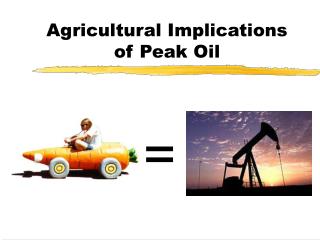 Agricultural Implications of Peak Oil. =. What is Peak Oil?. Since oil is a nonrenewable resource, we will eventually run out of it. The study of peak oil attempts to establish when oil production and discovery will peak, decline, and, eventually, stop. The Olduvai theory of human existence!.

The Beauty of Taiwan - . 3952 meters high from sea level, the main peak of yushan and the highest mountain in taiwan.

Sports Nutrition for Peak Performance - . we have been discussing basic concepts of nutrition: - food choices and

Endoparasites – Ruminants - . goals and objectives. understand the influence of parasitism on production become

Agricultural Extension - . aged 4713 fall 2002 manuel corro. in this class we will learn about:. definition of extension