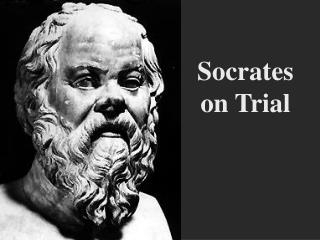 Socrates on Trial. The Apology. What is Socrates apologizing for? Apologia means “Defense” (not “apology”) Charges brought in 399 B.C. by Anytus, Lycon, and Meletus. Trial is historical Speeches may or may not be historical. The Apology. The Formal charges (24b): Corrupting the young. Socrates on Trial - . the apology. what is socrates apologizing for? apologia means “defense” (not “apology”)

The Trial of Socrates - . hey, so, uh, what do you think about…. what is truth?. let’s relate it to free speech in

Trial and Execution of Socrates - . democracy on trial. events in athens. 411 bce : aristocratic reaction; council of 400

Trial and Death of Socrates - . what is its historical significance?. lecture outline. kinds of love: (plato’s

The Apology The Trial of Socrates - . background – on the negative

The Trial and Death of Socrates

ON TRIAL - . a courtroom case from tuck everlasting. background . mae tuck has been charged with the murder of the man in

Socrates - . thinker peace-giver vagabond. i think it was unfair that the athenian government made socrates drink hemlock

Socrates - By: mahmoud saad. socrates. events in socrates’ life. “the unexamined life is not worth living for

Socrates - . socrates (469-399 b.c.e.). socrates never wrote his ideas. he debated with others to figure out the meaning

Socrates - . liptov. geography. geography. where does liptov lie ?. what can we do here?. the relief of liptov.

Socrates: - . i cannot teach anyone anything i can only make them think. dealing with diversity issues in supervision.

Socrates - . 470-399 b. c. things to note. socrates is, basically, the father of western philosophy he never wrote down

Socrates - . philosopher questioner warrior . i think socrotes was a wise man for thinking about what you normally