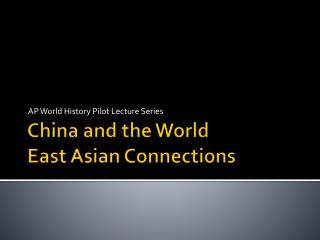 AP World History Pilot Lecture Series. China and the World East Asian Connections. Before we begin: Think about this…. “China will be the next superpower.” That claim was made by the British newspaper, The Guardian , in June 2006 was not alone in its assessment.

The World of Connections - . lectorial week 10 krystina benson. lex is here . . . from now until week 12. lex is seen to

THE WORLD OF East Asian Medicine &amp; Massage - . rogue agency actions. the washington board of naturopathy

East Asian Strategy - . used by the four tigers the only development strategy that has successfully moved developing