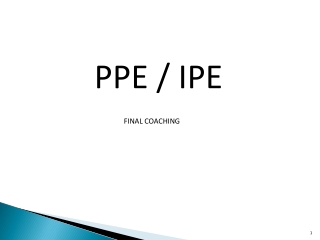 PPE / IPE. FINAL COACHING. A vertical turbine pump with the jump and motor closed coupled and design to be installed underground, as in the case of a deepwell pump. A. Horizontal split case pump. B. Booster pump. C. Submersible pump. D. Vertical shaft turbines pump. Axial Flow Fans - The term axial flow fan indicates that the air flows through the fan in an axial direction i.e.

Compressors - . basic classification and design overview. what are compressors?. compressors are mechanical devices that

Design for Focus and Flow - . plan y our design . what is the purpose ? design elements should match the message you want

Cascade - . august 2012 monthly briefing to keep you up to date with news from across the council. contents absence line

Cascade - . january 2014 monthly briefing to keep you up to date with news from across the council. in this issue. social

Optimization of the process chain for the design of axial compressors W. Riéra, A. Schmitz - Dlr - institute of

Cascade - . department for continuing education university of oxford. findings and issues arising from the project.

Cascade - . december 2012 monthly briefing to keep you up to date with news from across the council. contents the best