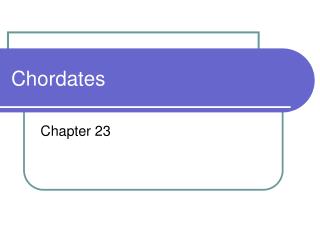 The Animal Kingdom: The Deuterostomes - . chapter 31. learning objective 1. what are the shared derived characters of

Chordates have a notochord and a dorsal, hollow nerve cord - . vertebrates are a subphylum of phylum chordata chordates

VERTEBRATE EVOLUTION AND DIVERSITY - . vertebrates have unique endoskeletons composed of: a cranium (skull) a backbone

Phylum Chordata - . the chordates are a group of particular interest to us as we belong to it, being members of the

In chordates, the long supporting rod that runs through the body is called the - . nerve cord. notochord. pharyngeal

The Deuterostomes - . origin of vertebrates and the evolution of “fish”. chordates (including vertebrates) and