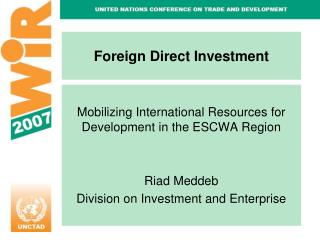 Capital Investment Appraisal - . aims…. for you to be able to understand the concepts of payback, arr, irr, dcf

The Direct Method - The DM - . the direct method : outline. historical backgrounds the motivation the how? the pioneers

Foreign Direct Investment - . question for today: why does investment capital flow from some economies to others?. why