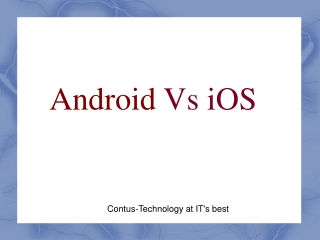 This presentation is about comparing the two leading operating systems Android, iOS in market. Android Vs. iOS - A dealer of mobiles and tablets, m k mobile shop in tin batti has been providing an extraordinary

Which is Better? iOS or Android Application Development? - Ideally, an app should be on both platforms. however, if you

Android, iOS or Ionic: Which way to go? - 97% business looks for a mobile application solution. as of 2016, mobile

iOS or Android – which platform is better for corporates? - Businesses are moving towards enterprise mobility and

Android or iOS? What Should you Choose as a Startup? - Read the full blog here: https://bit.ly/3n2y4e0 connect with us

iOS vs Android game development - When it comes to choosing a smartphone, one generally has to choose between mobile

It ’ s easy to get gloo for iOS or Android: - Download from the app store or google play store. create and account and

How to Record your windows, Macs, Linux, Android, or iOS - This is my power point document about how to record our