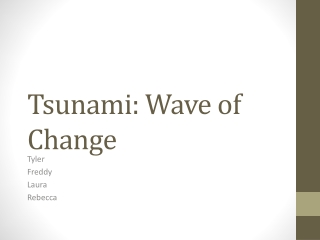 TSUNAMI - . tsunamis. learning objectives: to develop your understanding of the term tsunami. to be able to identify the

Tsunami Warning System - . tsunami. an ocean wave, generated by a submarine event such as an earthquake or volcanic

The SMILE High School Challenge 2008! TSUNAMIS - . so you think you know tsunamis?. is this a tsunami?. is this a

Weather - . by destiny starling. tsunami. a tsunami isn’t like a normal wave because it has a much longer wavelength.

TSUNAMI - . a tsunami is a disaster that can kill people. some tsunamis are disaster. tsunami. what causes tsunami to