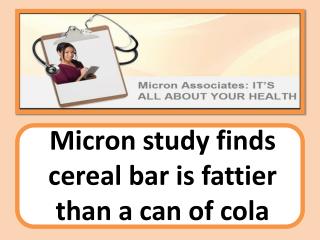 The image of cereal bars as a healthy snack is a ‘myth’, as study finds that many contain higher levels of fat and sugar than a can of cola. According to study, one of the 30 bars contains more than 30% sugar. Specifically, one bar, Nutri-Grain Elevenses, contained nearly four teaspoons of sugar (18g) – more than in a small 150ml can of cola (15.9g) and 20% of the recommended daily allowance. A kind of tracker roasted nut bar was found to be almost a third fat, and while some of this came from the peanuts and hazelnuts that also provide some nutritional content, the ingredients also contained vegetable fat and harmful hydrogenated fats. A cereal bar named monster puffs with their tag line “great for your lunchbox” marketed to children, contained 43.5% sugar, or more than two teaspoons. As Micron Associates Health Group compared the nutritional content of the bars they have used the manufacturer’s information and applied traffic light labeling to see if the levels of fat, saturated fat, sugar and salt were high, medium or low. The study found out that there were six of the seven cereal bars targeted at children were high in saturated fat. Only the Nakd Apple Pie was the only bar in the said study did not contain any added sugar, while the Alpen Light Apple and Sultana was the only one to have three green traffic lights for fat, saturated fat and salt. The Weetabix Oaty Strawberry Crusher bar was the healthiest choice for children with a low salt content and medium levels of fat and saturated fat, the Micron Health concluded. World Health Organization is calling for manufacturers to reduce sugar and fat in food products marketed to children and for tighter controls over the way they are promoted. Executive director Richard Lloyd said: ”People often choose cereal bars in the belief they’re healthier than chocolate or biscuits but our research shows this can be a myth.” With high levels of sugar and saturated fat in some of these products they should be on the sweet