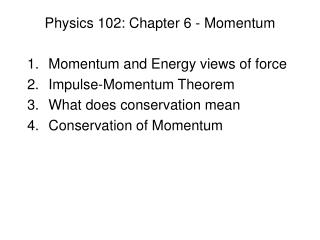 Physics 102: Chapter 6 - Momentum. Momentum and Energy views of force Impulse-Momentum Theorem What does conservation mean Conservation of Momentum. Exam 2 - On Wednesday. Exam notes Must be handwritten on 8.5” x 11” piece of paper Cannot be torn out of a notebook Ch7. Impulse and Momentum - . there are situations in which force acting on an object is not constant, but varies with

Physics for Scientists and Engineers, 6e - . chapter 6 – circular motion and other applications of newton’s

Chapters 7&amp;8 Newton’s 3 rd Law &amp; Momentum - . conceptual physics. for every force, there is an equal