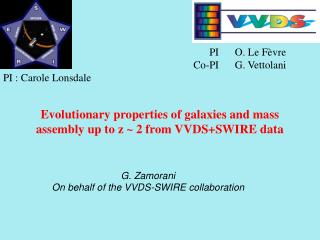 Evolutionary properties of galaxies and mass assembly up to z ~ 2 from VVDS+SWIRE data. PI O. Le Fèvre Co-PI G. Vettolani. PI : Carole Lonsdale. G. Zamorani On behalf of the VVDS-SWIRE collaboration. Outline of the talk. The VVDS 02 hr field (The “deep” part of the VVDS) :

Introduction to Chemistry - . matter : is anything that has mass and takes up space. properties of matter . chemistry is

How to pray (at) Mass? - . a look at the spiritual significance of the mass. introduction. you must have attended mass

Chapter 19 Galaxies And the Foundation of Modern Cosmology - . how are the lives of galaxies connected with the history

MOLAR MASS AND DEGREE OF POLYMERIZATION - . many properties of polymer show a strong dependence upon the size of the

Colligative Properties - . practical uses of solutions. units of concentration. whatever units you use, the goal is the

States of Matter - . chap. 13. gases. state of matter in which particles are separated by large distances. gases. gas

Natural Selection - . evolutionary ideas. a lthough darwin is given much credit for evolutionary theory, he was not the