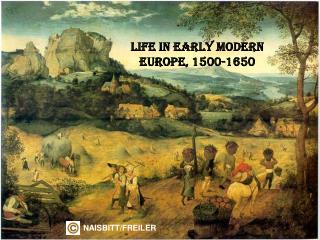 LIFE IN EARLY MODERN EUROPE, 1500-1650. NAISBITT/FREILER. INTRO: SETTING THE SCENE. The scene of communal farming is repeated with little variation throughout Europe in the early modern era With one bed per household, the family was obviously close-knit Chapter 17 – The Early Middle Ages - . section notes. geography of europe europe after the fall of rome feudalism and

History 336 Ideas and Society in Early Modern Europe: The Debate about Gender and Identity - . march 13, 2013 tutorial

WAS THERE PROGRESS TOWARD EQUALITY BETWEEN THE SEXES IN EARLY MODERN EUROPE? - . literacy rates rose among women, but not

History 321: State and Society in Early Modern Europe: The Thirty Years War - . central questions. what were the key

History of the English Language - . a brief overview. periods of english. old english circa 410 – 1100 a.d. middle