Chapter 6: A Tour of the Cell - PowerPoint PPT Presentation 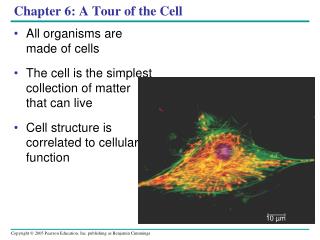 Chapter 6: A Tour of the Cell 10 µm . Chapter 6: A Tour of the Cell. All organisms are made of cells The cell is the simplest collection of matter that can live Cell structure is correlated to cellular function. Microscopy. Light microscopes (LMs)

Chapter 6: A Tour of the Cell

Chapter 17 - From Gene to Protein - . now that we know how the genetic design information that codes for all the

Chapter 12 DNA Analysis - . identify individuals from unique genetic code in every nucleated cell in the human body can

Chapter 6 A Tour of the Cell - . ap biology smiley. basic structure of every organism. based on 1 of 2 types of cells

CHAPTER 10 CELL GROWTH AND DIVISION (page241) - . *-cells cannot grow by simply increasing in size because of a limiting

CELL STRUCTURE CH 6 - . cells are the smallest collection of matter that is alive all living things are made of cells all

A Tour of the Cell - . chapter 6 introduction bozeman tutorial: tour of the cell (14:16). overview of cells. cell theory