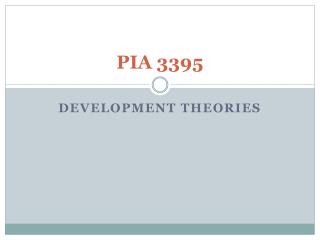 PIA 3395. Development Theories. Discourse Analysis. Some Examples and the "How long have you been beating your spouse problem.". Discourse Analysis and Related Debate. A term for a number of approaches to analyzing written, spoken or signed language use. Something Like This?.

PIA 2501 - Development policy and management week three. pia 2501. where we have been and where we are going. images are