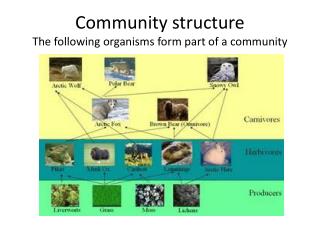 Community structure The following organisms form part of a community

Community structure The following organisms form part of a community. A community is a group of populations (producers, consumers and decomposers) living together in a habitat. Predator-prey relationships.

Community structure The following organisms form part of a community

Ways to categorize groups of populations (from Fauth et al . 1996) - Detritus feeding caracidae (family of fish) in an

Levels of Organization Quiz - . 1. a pod of bottlenose dolphins living in a specific region can be identified as which

Levels of Organization of Life - . presentation based on one from

Interspecific Interactions and the Ecology of Communities Chapter 57 - . biological communities. community sets of

ECOSYSTEMS - . chapter 19 organisation. e1 populations are the units of the community. e1.1 know that a community is made

Community ecology - . interactions. when organisms live together in ecological communities, they interact constantly.

Species Interactions - . niche. definition: the role of a species within an ecosystem not just the habitat, but how it

Species Interactions - . interactions between species are categorized at the level where one population interacts with

BIOLOGY 403: PRINCIPLES OF ECOLOGY (Niche and Species-Species Interactions) - . the ecological niche i. we have all The Ecosystem - . topic 2.1 structure. some useful definitions:. species – a group of organisms that can interbreed and