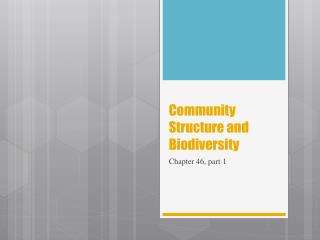 Community Structure and Biodiversity. Chapter 46, part 1. Bell Ringer, 9/9. Come in and sit down QUIETLY. You can keep your desks in groups as long as you can do so quietly. What is one question that you wish had been on the test? Write the question and then answer it.

Outline - . the concept of the community diversity and composition models the structure of communities island

Community Ecology: Structure, Species Interactions, Succession and Sustainability Chapter 8 - . “what is this balance

Community Structure &amp; Biodiversity - . community. all the populations that live together in a habitat type of

Community structure The following organisms form part of a community - . a community is a group of populations

Biodiversity Defined - . “biodiversity is the total variety of life on earth. it includes all genes, species and