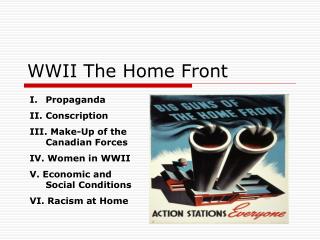 WWII The Home Front. Propaganda II. Conscription III. Make-Up of the Canadian Forces IV. Women in WWII V. Economic and Social Conditions VI. Racism at Home. I. Propaganda. Definition: Mass communication to achieve a goal. May be positive or negative. WWII Home Front - . a. military mobilization. enlistment in the military. draft reinstated this time they were screened

WWII on the Home Front - . opener. how many sacrifices should the government ask you to make during war time? what

The Canadian Home Front During WWII - . women during wwii. actively involved in military 1941 formation of cwac

US Home-Front during WWII - Government expansion, and civil liberties. us home-front during wwii. industrial production.