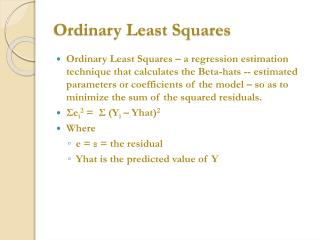 Ordinary Least Squares. Ordinary Least Squares – a regression estimation technique that calculates the Beta-hats -- estimated parameters or coefficients of the model – so as to minimize the sum of the squared residuals. Σ e i 2 = Σ (Y i – Yhat) 2 Where e = ε = the residual

“You must understand…I am ordinary. Painfully ordinary. This is not modesty. This is a fact. - “you must