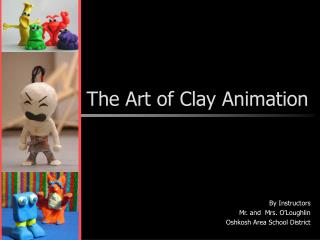 The Art of Clay Animation The Art of Clay Animation

clay Animation - . a.k.a. claymation. as we have seen, animation has been used in early days of film in some cases clay

Clay - . what ? how ? why ?. ceramics. ceramic object made of clay and fired (baked). clay - an earthy material that is

Clay - . terms and processes. preparing clay. wedging – a process of clearing air bubbles out of clay by slamming it on

CLAY! - . building methods. pinch -. shaping a clay bowl by squeezing it between the thumb and fingers. coil -. using

STAGES OF CLAY - . 1. plastic-ware -. clay that is soft, pliable and easy to work with. right out of the bag or the pug

Physics of Animation (Art/Physics 123) - . prof. alejandro garcia fall 2009. class is fully enrolled and i am not allowed

The 7 stages of Clay - . stage 1: raw clay. this is clay in its raw, natural s tate when dug up from the ground . the

Stages of clay - . raw clay/ earthen ware. - clay that has not been processed (made into something) -can be premixed or

Clay - . clay. clay is a naturally material composed primarily of fine- grained mineral and water the combination of the

The Study of Clay - . what is clay?. decomposed rock. chemically it is a combination of alumina, silica, and water. where

Stages of Clay - . how does clay change from the raw clay in the bag to the finished piece?. stage 1: wet clay. the clay

Art Clay Silver - . preparation silver clay is water-based and dries naturally in the air use clay as soon as possible