Models on WHY? - PowerPoint PPT Presentation 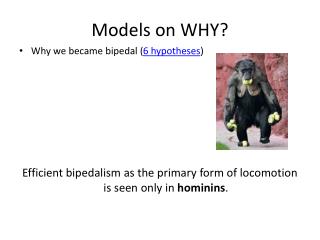 Models on WHY?. Why we became bipedal ( 6 hypotheses ) Efficient bipedalism as the primary form of locomotion is seen only in hominins . Origins of all these bipedalism tendencies?. Primate Evolution.

MODELS OF HEALTH PROMOTION - . objectives: you students will. understand the parameters required for health promotion