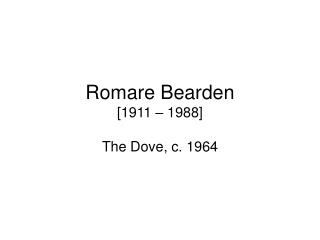 Harlem Renaissance - . collage as an art form using perspective to create the illusion of depth. romare bearden. a famous

“Memory embellishes life. Forgetfulness makes it possible.” - . romare bearden. 1911-1988. what is the harlem

Virginia Haviland - . a pioneer and leader in youth services by: danielle todd. brief biography. may 21, 1911 – january

RomARe bearden - . working with juxtaposition. core vocabulary. collage: a work of art that consists of an assemblage of

Romare Bearden Paintings - .  &quot;when i [august wilson] saw his work, it was the first time that i had seen black

Aim: How did the 1911 Triangle shirtwaist factory fire incident help improve workers safety? - . do now: what was the