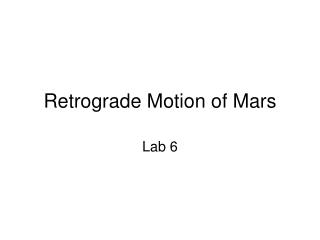 Retrograde Motion of Mars. Lab 6. Brief Overview of Mars. Best views of Mars are at opposition and when it is at perihelion – a favorable opposition – when it is about the size of a head at 1 mile (every 15 years) About 1.5 AU from the Sun Orbital period ~2 years (1.88 yrs) Retrograde Motion - . what is retrograde motion?. if you were to watch mars in the night sky over a period of many

Retrograde motion of Mars, June to November, 2003 - . who is this guy? use skygazer or starcal to find out! . the four

Retrograde Loops of Mars - . copernicus (1543). ptolemaic model failed to reproduce the observations also, the model is

The problem of Retrograde Motion - . observations of anomalous motion ignore it? retrofit it? revise the model with it?.

In Ptolemy’s model, the epicycle moving along the deferent causes retrograde motion (here of Mars) - . in the

mercury retrograde 2020 - Mercury is in

Information of Mars - . mars is the fourth planet from the sun and is commonly referred to as the red planet. the rocks

Information of Mars - . mars is the fourth planet from the sun and is commonly referred to as the red planet. the rocks

Moles of Mars - . by: anindita &amp; judy. question:. a mole of mars candy bars placed end to end would reach from