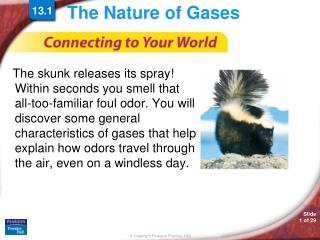 The Nature of Gases The Nature of Gases. 13.1. The skunk releases its spray! Within seconds you smell that all-too-familiar foul odor. You will discover some general characteristics of gases that help explain how odors travel through the air, even on a windless day. 13.1. Kinetic Theory and a Model for Gases.

The Nature of Gases

Review of Gases - . the nature of gases…. gases all have common physical properties: mass easily compressible take the

GASES - . chapter thirteen: the behavior of gases. 13.1 gases, pressure, and the atmosphere 13.2 the gas laws. chapter

Energy and Gases - . kinetic energy : is the energy of motion. potential energy : energy of position or stored energy

Chemistry II - . unit 1 gases. the nature of gases. objectives: describe the assumption of the kinetic theory as it

The Nature of Gases - . regardless of their chemical identity, a ll gases display similar physical behavior. examples of

Chemistry II - . unit 1 gases. the nature of gases. objectives: describe the assumption of the kinetic theory as it

Gases Day 3 - . standard 4:the kinetic molecular theory describes the motion of atoms and molecules and explains the

Unit 6: Gases and Gas Laws - . particles of matter are always in motion volume of individual particles is  zero.

Kinetic-Molecular Theory and the Nature of Gases.1 - . the kinetic-molecular theory applies only to ideal gases. an ideal