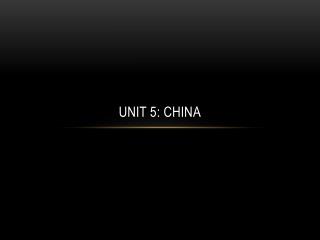 Unit 5: China. History. For centuries China was a closed country trading only with their neighbors. They distrusted western nations . Eventually European nations and the US forced their way into China China was not strong enough militarily to keep the westerners out. History.

Unit 18 New Zealand - . period 2 reading. step 1 pre-reading: facts about islands. it lies off the east coast of the

My Trip Across China: A 7-Day Affair - . amery thao period 7. map of china. plan of action temple of heaven bird’s

Unit 4 - . upper intermediate. unit 4. teams china and india discuss together the shape of your country, where the

Unit-3-China - . shang dynasty. warm-up. complete the post-group evaluation of the shang museum exhibit. this is private

China - . china. china. before one can understand china, we must view its cultural and historical locations . . the