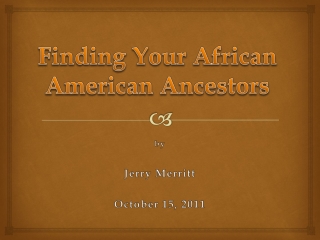 Finding Your African American Ancestors. by Jerry Merritt October 15, 2011. Objectives. Suggest resources to get you started. Show how to interpret the data you find to speed you along in your search. Present some successful examples of AA research. Why Do Genealogy?. Finding Your African American Ancestors - . by jerry merritt october 15 , 2011. objectives. suggest resources to get you

Finding Ancestors using the Internet - . by jerry merritt. objectives. pass on a few simple tips and tricks to maximize

Unit 5 Meeting your ancestors - . using language. reading. the feast: 18, 000 bc. explanations of some of the important