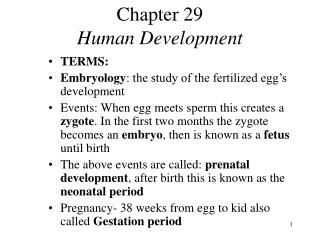 Chapter 29 Human Development. TERMS: Embryology : the study of the fertilized egg’s development Events: When egg meets sperm this creates a zygote . In the first two months the zygote becomes an embryo , then is known as a fetus until birth Chapter 29 - . skill themes in dance. chapter 29 key points. chapter aims to foster an understanding of the teaching of

Chapter 29 - . electromagnetic induction. induced current. you mean you can generate electricity this way??!. for my next

Chapter 29 - . musculoskeletal care. objectives (1 of 2). describe the functions of the muscular system. describe