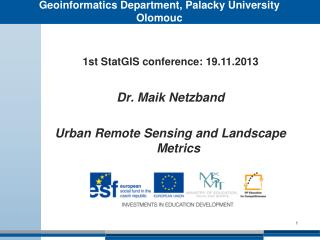 Palacky University Olomouc Faculty of Law - . law of armed conflict and use of force historical development of the law on

Department of Geoinformatics, Faculty of Science, Palacký University in Olomouc - On shape metrics in landscape

Geoinformatics - . introduction. the web. goal of the current web is to make knowledge widely accessible and to increase

Geoinformatics - . xml – part iii. the &lt; complextype &gt; element …. this type of element either has the