What is Force? - PowerPoint PPT Presentation 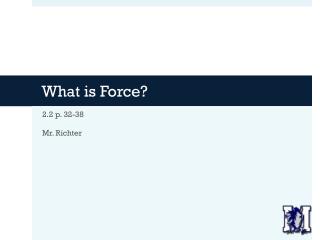 FORCE - . the cause of acceleration. force: a push or a pull . examples: muscular forces force of gravity friction force

What is Force? - . a force is a push or pull that causes an object to move faster or slower, stop, change direction, or

What is Force? - . force definition. the word force and be used in many different ways. however the definition in science

Forces and Motion - . prentice hall physical science: concepts in action chapter 12. may the force be with you. forces

Forces and Motion - . prentice hall physical science: concepts in action chapter 12. may the force be with you. forces

Section 1: The Nature of Force What is a force? - . force a push or pull on an object has both size &amp; direction

What is a Force? - . a force is a push or a pull causing a change in velocity or causing deformation. dynamics . what is

What is Force? - . a force is a push or pull. what is gravity?. gravity is the force that makes objects fall to the

Force and Motion Test Review - . 1. what is a force? a push or a pull. 2. what is the difference between balanced forces

What is a force? - . pick up 2 sheets in the back. watch the book what am i doing in all of these demonstrations? i am

Union is force but Dispersions is weakness - . done by: maitha ali al ameri &amp; abeer. the bundle of sticks: . what

Forces and Motion - . what is a force?. a force is a push or pull acting on an object. forces can cause motion to start,

FORCE - . chapter 10 text. force. a push or a pull in a certain direction si unit = newton (n). combining forces. the

What is a Force - . chapter 1, sec.2. force is measured in newtons (n). all forces are exerted by one object on another.