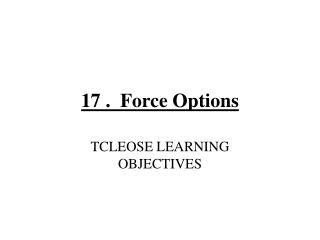 17 . Force Options. TCLEOSE LEARNING OBJECTIVES. Unit Goal: 17.1. The student will have an understanding of the legal authorities pertaining to peace officers’ use of force. Objectives. 17 . Force Options - . tcleose learning objectives. unit goal: 17.1. the student will have an understanding of the legal

CIT Force Options - . cit force options. this course is designed as an advanced cit class and suggested for those who

Options@17/18 - . decision making. in this section you will think about what you want and what sort of person you are.

Chapter 17 Real Options - . real options. the application of derivatives theory to the operation and valuation of real

Chapter 17 Principles of Options and Option Pricing - . we sent the first draft of our paper to the journal of political

Air Force Adds New Capability to C-17 - . the usaf and usn announced today that the first ever c-17 carrier landing has

Lecture 17: Force Unification Lecture 18: The Inflationary Universe - . astronomy 5: the formation and evolution of the

Options - . wiggs civitillo. basic function. a contract between two parties concerning the buying or selling of an asset

Options - . financial options contracts. an option is a right (rather than a commitment) to buy or sell an asset at a