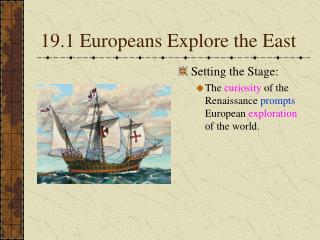 European Exploration - . ch 19.1. what exploration had already occurred?. europeans explored during the crusades

Europeans Explore the East - . key idea driven by the desire for wealth and christian converts, europeans began an age of

How much do you know about Europe? - . the european day of languages 26 th september. which country’s name means ‘low

The Search for Spices - . chapter 2 section 1. motivations for looking “out’. people wanted spices, cloth the

AIM What drives Europeans to want to explore India? Versus - Do now: pretend you are an explorer in the 1400’s. you