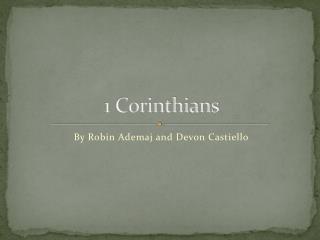 1 Corinthians . By Robin Ademaj and Devon Castiello. Author. One of the 21 Letters written by Paul. Written around 56 A.D. Who was Paul? -Jew from Tarsus; born around 10 C.E. -Pharisee who persecuted early Christians -had a dramatic conversion in Damascus

Redmond EMS Staff Meeting - . august/september meeting. welcome. any change, even a change for the better, is always

Ministry in Emerging Context - . rev. ruben duran elca. the constant: revealed in christ. god is working to reconcile the

Why the Catholic Church Part II - . welcome to saint stephen’s catholic church. august 31, 2004. the church: the next

Soteriology - . what does it mean to be saved?. “he made him who knew no sin to be sin on our behalf, so that we might

Paul’s Teaching on Marriage at Corinth - . a study of 1 corinthians 7. background. paul is answering certain reports /