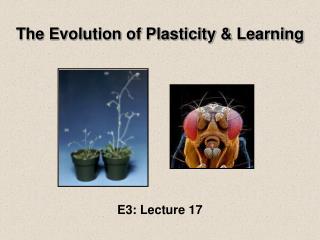 The Evolution of Plasticity & Learning The Evolution of Plasticity & Learning. E3: Lecture 17. Phenotype versus Genotype.

The Evolution of Plasticity & Learning

Nurture and Plasticity - . catherine malabou on why it’s us that makes our brains and not the other way around malabou,

Experimental evolution - . the outcome of selection for high and low oil content in the illinois corn experiment. william

Adaptive variation - . a feature of an organism that has been favoured by natural selection because of that feature's

7.1 adaptation and variation - . sbi3u ms. de sousa. only the fittest survive…. what does the saying : «  only the

Adaptation - . what is adaptation? • not phenotypic plasticity • not genetic drift • must be targets of

Adaptation vs Plasticity - . the problem:. people often wish to jump to the conclusion that a trait change they see is

Principle of Superposition - . for a linear elastic system, the individual components of stress, strain, displacement are

Lecture No. 04 - . subject: properties of cement prepared by dr. salah al-dulaijan. objectives of lecture. to explain