The US defeat at Pearl Harbor December 7 th , 1941 “A date which will live in infamy.” - PowerPoint PPT Presentation 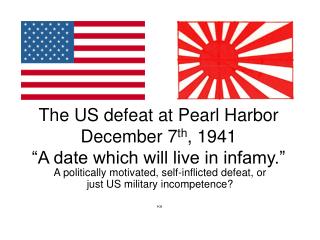 The US defeat at Pearl Harbor December 7 th , 1941 “A date which will live in infamy.”. A politically motivated, self-inflicted defeat, or just US military incompetence? KA. The traditional story. Once upon a time…. Background.

December 7, 1941 “A day that will live in infamy” - . consequences of the bombing of pearl harbor. u.s. enters wwii

PEARL HARBOR - . the day of infamy december 7, 1941. causes…. the u.s. demanded that japan withdraw from china and

Franklin Delano Roosevelt- Pearl Harbor Address to the Nation - . imagine that the united states was just attacked by

Pearl Harbor - . by:. introduction. the war was between the japanese and americans. the japanese had attacked pearl

Pearl Harbor - . december 7, 1941. the japanese attack . where is pearl harbor?. imagine. what did japan want?. japan

A Day that will Live In Infamy - . 9/11 remembered. franklin delano roosevelt. 32 nd president of the united states. he

Japanese Attack on Pearl Harbor - . miss fisk. opener 3-24-10. what is your reaction to the movie that you just watched?.