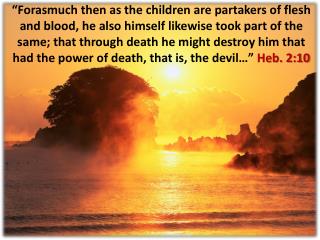 “Forasmuch then as the children are partakers of flesh and blood, he also himself likewise took part of the same; that through death he might destroy him that had the power of death, that is, the devil…” Heb. 2:10. Sojourner Truth - . her early life as a slave. sojourner truth was born isabella to her parents, james and betsey, around

What is Beauty? - . the trouble with beauty . beauty is truth, truth beauty,-that is all ye know on earth, and all ye

The Truth about Cholesterol - . one of the most maligned of all nutrients is cholesterol . even sodium is not so greatly

M.C. Escher - . “i believe that producing pictures, as i do, is almost solely a question of wanting so very much to do

The Path of Truth to Life Bible Translation Project - . in search of the truth finding the whole truth how are we to