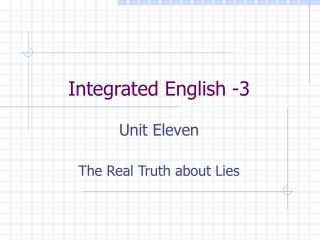 Integrated English -3. Unit Eleven The Real Truth about Lies. Suggested topics for speech. Truth and Lies/ Honesty and Lies White Lies It is (not) always essential to tell the truth. Should doctors always tell the truth?. Questions for general understanding. An Integrated English Course Book 4 - . unit nine the discus thrower. general understanding of text i. what do you know