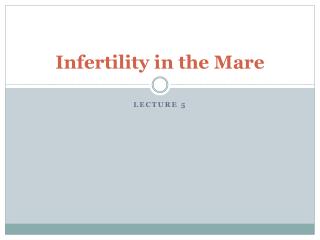 Infertility in the Mare

Infertility in the Mare. Lecture 5. Introduction. Extrinsic Factors Lack of Use Sub-fertile Stallion Poor management Intrinsic Factors Many, many, many. Age. Reported to have the most significant bearing on reproductive performance Decrease in fertility may be in part due to

Infertility in the Mare

Infertility Symptoms - "in women, changes in the menstrual cycle andÂ ovulationÂ may be a symptom of a disease Infertility - . infertility. is another area of gynecology in which tcm shines. due to a lack of essence. essence is the

Infertility - . beth mcneill texas a&amp;m university. what is infertility?. a condition which impairs the

INFERTILITY - . infertility. it is the inability to produce children in spite of unprotected sexual contact. the region

Fertility Control and the Management of the Wild Horses: Compared to What? - Jay f. kirkpatrick kimberly m. frank robin

INFERTILITY - . assessment and treatment of patients with fertility problems dr nitu raje-ghatge. why learn about it?.