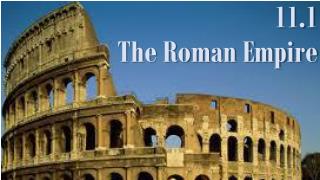 11.1 The Roman Empire. Rome’s Practical Achievements. Roman Roads “All roads lead to Rome.” Roman roads fanned out from Rome like spokes on a wheel Built to help troops get where they are going faster The Roman army had engineers, architects, surveyors traveling with them

Chapter 5 - . ancient rome and the rise of christianity. 5.1. the roman world takes shape. objectives:. describe the