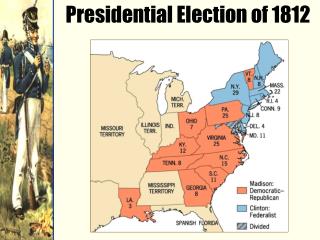 Presidential Election of 1812. The War of 1812 2nd War of Independence Mr. Madison’s War. War breaks out again between the United States and Britain in 1812. MR. MADISON'S WAR. madwar. War of 1812. War Hawks

Thomas Jefferson was elected the third president of the U.S. in 1800 - Thomas jefferson and the decision to purchase the

#4 James Madison War of 1812 - . from father of the constitution to president of the nation. do now:. how did president

Nationalism and Sectionalism - . essential questions: in what ways can geography lead to political, economic, and

The Impending Crisis - . talking about a revolution the abolitionists. expansionism. empire of liberty war of 1812 and