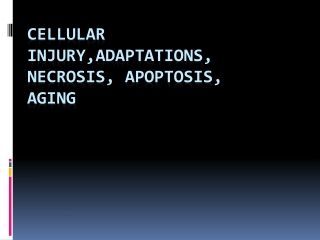 cell injury ii cellular adaptations - Hyperplasia. increase in the number of cells in an organ or tissuemay or may not be

Section 1 Cellular Adaptations - . cells must constantly adapt, even under normal conditions, to changes in their

Chapter 2 Cellular Responses to Stress, Injury, and Aging - . cells are able to adapt to changes in work demands or

Cellular Aspects of Aging - Is there a connection between organismal aging and cellular aging ??. plasma