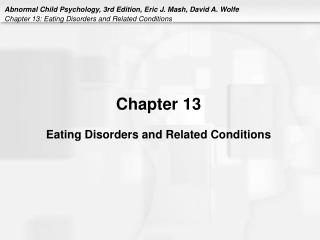 Is Your Eating “Normal” - . what is an eating disorder?. an illness in which a person tries to control their weight

Text 2 – Eating Out by U A Fanthorpe - . lesson objective: to apply literary terms to the poem to analyse the

Eating Disorders - . definition. eating disorders are a group of serious conditions in which you're so preoccupied with

The Eating Habits of Animals