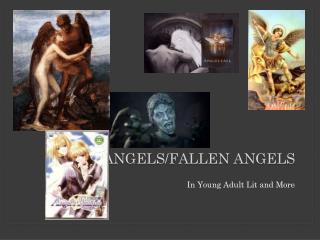 ANGELS - . the 6th study in the series. studies written by william carey. presentation by michael salzman. all texts are

The Angels of God - . class 2: the power and authority of the angels. note the link of elohim and angels. psalm 8:4-5

A Class Discussion on Angels - . adult auditorium class 9/22/13. common misconceptions. how do people see angels?. most

ANGELS WE HAVE HEARD ON HIGH - . glory to god in the highest, and on earth peace to men on whom his favor rests. luke

the angels prayer before sleep - . four corners has my bed. four angels that saved me. two feet, two to the head. and the

Fallen Angels - . written by: walter dean myers. attention getter. “there is only two kinds of people in vietnam.

Fallen Angels - . by: walter dean myers. we few, we happy few, we band of brothers ; for he today that sheds his blood